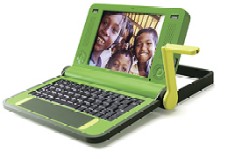 The famous $100 laptop is to be demonstrated to the U.N. this week. The initiative headed by MIT has created the affordable computers to be distributed to millions of schoolchildren in developing countries. They are powered by a hand crank and include an operating system, word processor, e-mail program and web browser. Initial plans call for 5 to 10 million units to be distributed in up to 12 countries on the first year of the program.

A non-profit organization called One Laptop Per Child has been created to oversee the project. The organization has been funded by $2 million donations from Google, AMD, Red Hat, News Corp and Brightstar Corp.

There is also talk of developing a commercial model of the computer that may cost around $200.