This hoax on gadget news brought to you by Jennifer Thompson.

New Jersey, NY – Thumbs tired of typing away on your handheld? Well, the ToeTapper 2340TZ from Peditron just debuted this week amidst vast criticism in the increasingly saturated PDA market. It is about twice the size of leading handhelds and has large, inverted buttons on the touch screen display. It gets strapped to your ankle for portability by way of a “Dankle”, and can be concealed comfortably under your pant leg. All typing is done, you guessed it, with your toes.

To the average user, the ToeTapper (TT, streetname “Doubletee”) might seem extremely awkward. In fact, it has not at all been well received by PDA aficionados. Gizmodo called it: “Completely preposterous, a joke”. Regardless, there is no denying that it outshines its hand-manipulated counterparts with its bright, backlit 640 x 180 widescreen display. More important than its impressive technical specs, it is finding legions of fans.

Take, for example, TrANZiEnt Software Regional Sales Manager Michel Benford, who can’t seem to get enough of his TT.

“I just got tired of holding something and fiddling with it all day. Everyone and their brother has a handheld. I wanted something different, something that would have forward compatibility when all of this wireless nonsense subsides. Besides, the Dankle is really lightweight and frees up my hands for other things like my Nokia and my Blackberry.” 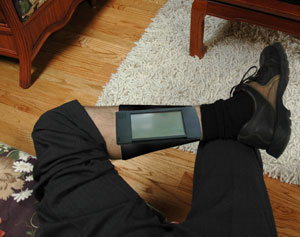 But Benford didn’t dismiss lightly the quizzical looks and mocking laughter he received when he first unveiled the TT at a company-wide meeting last Thursday.

“Sure, at first the guys at work looked at me kind of strange when I removed my shoes and socks and then took it out of the Dankle to send my regular “Sell! Sell! Sell! morningvational email to my team, but once they found out that this baby not only has 128MB of RAM and 4GB of internal storage, it has a built-in Satellite DMB with High-def and recording capabilities — They were lining up outside my cubicle, shoes in hand. If I’m waiting for a meeting or for a client to show up, I just whip up my pant leg and can start watching sports. The “auto-off” light sensing capability knows when I put my pant leg down, and goes right into sleep mode. Brad from Marketing said he was going over to Best Buy at lunch to order one.” Benford trails off, the smell of self-congratulation thick in the air.

He continues. “You know how they say you only use ten percent of your brain, well I think we use even less of our foot capabilities. Probably closer to like, seven percent” notes Benford.

“But no doubt, the TT isn’t for the faint of heart; she takes good toe-eye co-ordination.” says Benford, patting the unit as if it were animate, and attributing to it a gender normally reserved for sea-faring vessels and cars. “It did take me some time to get use to changing toes. It’s your natural reaction to want to type with the big guy, but as any hardcore TT user will tell you, if you don’t swap toes early in the game, you’re dead in the water”.

However, not everyone is extolling the virtues of the TT2340TZ, namely those on the tech side.

“That thing is a piece of shit” claims TrANZient Software Developer Curtis Russell, when asked to comment on the TT en route to his afternoon foosball game. “Anyone who buys it would have to be a complete idiot. Besides, it doesn’t even play MP3s yet”.

Still Benford sees the TT2340TZ as anything but an Achilles heel and is considering approaching the CIO of TrANzienT Software to see if he would be interested in partnering with Peditron.

“There’s an untapped market here, and I am going to see that TrANzient becomes a player before it is too late” says Benford, pausing for a good ten seconds until eventually throwing his head back and shouting: “Pun intended!”.

Critics aside, Benford plans on sticking with his TT, and is looking forward to upgrading in Q2 to the new unit.

“I heard through the blogvine that they will be revamping the casing to mimic the true color of human skin so it blends in more seamlessly with the ankle area. I’ve already set up a flag in Outlook to remind me of the pre-order date, and I am a registered user on their beta list, thank god” says Benford, sighing poignantly.

So it seems critics aren’t enough to dissuade this die-hard fan. “Hey” Benford starts with a knowing smirk while untying his shoes in preparation to send a two-way.

“Didn’t they mock Newton for inventing the light bulb? Dissention is the price you pay for being a visionary, folks.”