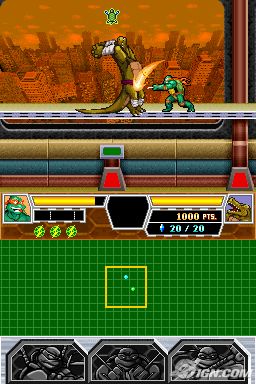 Anyone growing up in the 80s and early 90s will remember waking up bright and early Saturday morning to catch Leonardo, Donatello, Raphael and Michelangelo beat the living tar out of foot soldier or two as they battle their way to get at Shredder and Krang. Of course, we all flooded the arcades as well in the hugely popular Teenage Mutant Ninja Turtles multiplayer game, side-scrolling our way to greatness. Well, Konami has been trying to revitalize the TMNT franchise these past few years, basing their new games on the newer Saturday morning cartoon. TMNT3: Mutant Nightmare is the latest incarnation of the series, and is now available for your Nintendo DS.

Instead of allowing for 3-D movement, this game forces us on a 2D path without any foreground or background movement available. As per usual, you get to pick your favourite turtle to use for the more than 50 stages packed into this game, but that includes both the single player adventure and battle modes. As with every other game made for the DS, developers are bent on using the touch-screen capability even it doesn’t add anything to the gameplay. TMNT 3 is no different, forcing you to whip out the stylus for any double-team action or to open a floodgate, for example. The graphics and sound leave much to be desired, and the gameplay, though challenging, becomes very repetitive with a typical button-mashing strategy.