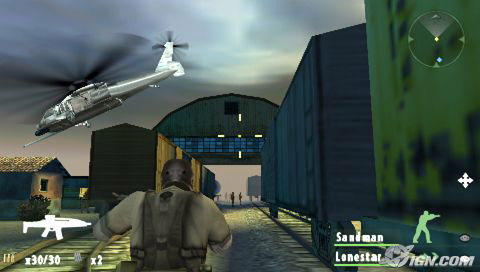 A welcomed new recruit to the PSP, SOCOM US Navy Seals Fireteam Bravo for PSP (let’s just call it FTB shall we?) is a true to the genre with minor tweaks here and there to conform to Sony’s portable format.

What makes FTB special is its close relationship with SOCOM 3 for the PS2. 3 of FTB’s 4 areas of operation can also be played on the PS2. It’s also the first PSP title to feature cross-talk functionality where actions you complete on the PSP can be transferred via USB connection to your PS2 and ultimately influence your console game.

And what would the SOCOM experience be without voice chat. FTB fully supports the PSP headset ($19.99 at most retailers) so you can “Tango Down” all you want.

Rated M for Mature, SOCOM for PSP hits stores soon and will retail for about $39.99