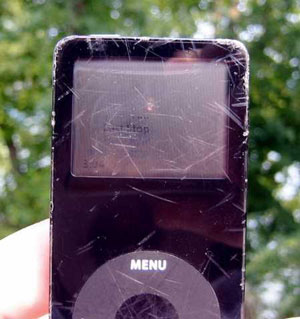 The Apple iPod nano problem has now gone international, with new filings and complaints from customers in Mexico and the UK. They claim there’s a problem with the flimsy screens on the pint-sized music players, so they decided to join a class action suit and are taking their case all the way to US District Court.

“My dog’s chew toys get less scratches than using my nano for three hours in my pocket” one irate nano owner contributed in an online forum. Similar complaints about scratches and cracks circulated and prompted Apple to offer replacements within a week of nano’s launch in September. Ultimately leading to the class-action suit filed November 4.

Apple’s response? Scratches and cracks have only affected less than 1 tenth of a percent of the iPod nanos the company has shipped. “This is a real but minor issue involving a vendor quality problem of a small number of units. It’s not a design issue.” So says Tom Neumayr of Apple.

Apparently the thin coat of resin designed to guard against scratches, is just too damn thin.

According to the plaintiff in the case, lead attorney Steve Berman “it’s not just a small problem or a bad batch of Nanos, but a defect in the overall design.”