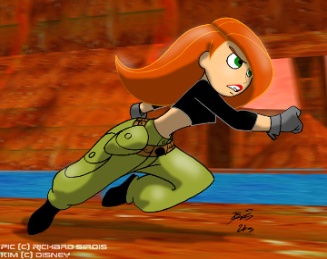 Video games aren’t just for boys anymore, if they ever were. According to The Education Arcade, 39% of all video game players are girls. Disney and their games arm Buena Vista Games isn’t going to let that market pass them by. They have leveraged the girl-targeted content from Disney Channel to make games based on Lizzie McGuire, Raven and Kim Possible.

The most recent offering is their first for Nintendo DS, ‘Kim Possible: Kimmunicator’. As you all know so well, Kim Possible is a cheerleader and high school student who can save the world from evil villains. The game has Kim, Ron Stoppable and something called Rufus the naked mole rat. What more could you kim-possibly need?

The Nintendo DS dual-screen capabilities are maximized for a unique game play experience. Players can pick locks and assemble gadgets using the DS touch screen and microphone. These tools and more will be needed for Kim to defeat the omnipresent villain Drakken, who has kidnapped Wade and is forcing him to develop yet another Doomsday device. In 15 action-packed levels, the game includes puzzle sequences, Kim’s hidden outfit and her stealth maneuvers such as para-gliding into Drakken’s lair to rescue Ron.

The game is rated E for Everyone, so there is nothing standing in the way of you owning this one. It retails for $29.99.