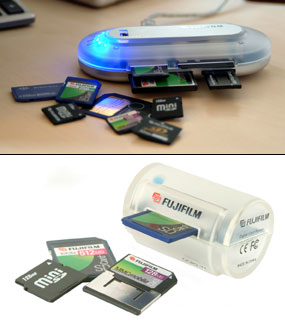 Fujifilm is already a leader in memory cards. Today they announced a move which they hope will widen the gap. They have released four new memory card readers. All four readers can transfer data at up to 480 Mbps via plug-and-play and USB 2.0. They also sport a blue LED that lights up when in use, which they promise has a futuristic look.

The four models each offer different uses. The DCR2-161 can read 16 types of cards and also serves as a 3-port USB hub. It features a power source if a device needs more power than the USB port provides. The DRC2-XD reads xD-Picture cards. The DRC2-71 reads 7 types of cards, while the DRC2-MS reads four different types of cards.

The three smaller units are currently available in Britain and retail for £12.99. The fancier DCR2-161 will be available at the end of November and will cost £34.99. No word when these glowing beauties will cross the ocean.