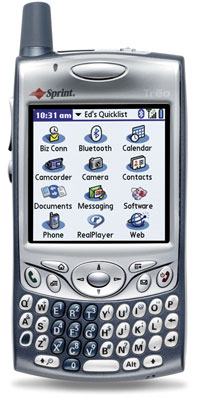 According to one Wall Street analyst’s report, Palm will push its Treo smart-phone family into the mid-range next year. Caris & Co. analyst Susan Kalla wrote last week, according to a Forbes.com report this weekend that the $200 mid-range Treos will appear mid-2006.

While the details about the devices remain shrouded in mystery, one can assume, given Palm’s own suggestion that the Windows Mobile Treo will be of a high-end nature. Given this it may be easy to surmise that the cheaper model will run the Palm OS. Other enigmatic reports from unnamed analysts suggest it could be codenamed ‘Lowrider’.

The Windows Mobile-based Treo with 3G capabilities is set to ship “in early calendar 2006”, Palm has already said, exclusively through US carrier Verizon, at least until the middle of the year. Kalla says it will ship by the end of February, which will ultimately mark the demise of Palm’s Q3 FY 2006 and the successor to the Treo 650.

The Windows Mobile Treo isn’t expected outside the U.S. until 2006, Palm has itself said, “We had previously thought the product would ship in the third quarter,” she wrote, “but believe Palm delayed it so it can concentrate on the Windows Treo release.”