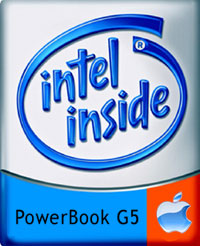 Starting off in 2006, Apple is expected to release updated PowerBook and iBook notebook lines that appear to spearhead the Mac maker’s shift onto Intel, according to AppleInsider’s “extremely reliable sources”.

Updated PowerBooks are likely to be announced first. Insiders are expecting a new 15-inch widescreen model first, with much-reduced thickness. In Fact 20-25 per cent thinner than the one you can buy currently which could bring it from 2.8cm to between 2.1 and 2.2cm.

Apple announced in June 2005 that it would move to Intel processors from PowerPC technology during 2006, with the first machines due on the market by June 2006 and the range completely ported over by the end of 2007.

Reports last week suggested versions of Mac OS X for Intel and for PowerPC processors are both at parity, suggesting Apple is ready to ship the Intel release when it feels the time is right.