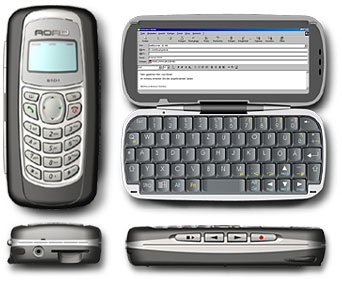 No actual product shots have been released, nor have any working units been put up for scrutiny, but ROAD, a German company, announced its plans for this phone in February. The clamshell-style smartphone was described, at the time, as having a full QWERTY keypad, a 640 x 240 pixel touchscreen display, an optional 2.0 MP digital camera, built-in WiFi and IrDA connectivity, a 400 MHz Xscale processor, 64 MB of ram, 64 MB of ROM, an SD expansion slot, and perhaps most creatively, a choice of operating systems (Linux, Windows Mobile, or Symbian).

Industry experts are hoping to have the opportunity for a hands-on review at January’s Consumer Electronics Show.