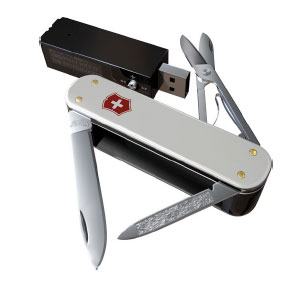 Technology is all about making things smaller and having more functions. Swissbit has embraced this philosophy with their line of Swiss Army knives that double as a USB key, and now, the company has taken the next logical step and mated a Swiss Army knife with an MP3 player. The s.beat comes in 1, 2, and 4GB capacities, and the MP3 player itself is detachable. It is capable of playing MP3, WMA and OGG formats as well as having a built-in FM tuner and 3-line high-contrast LCD display.

Packaged in with the tiny unit (measuring 74 x 22 x 24 mm) are a stylish remote control, headphones, USB extension cable, arm strap, and a protective cover for the USB port. It isn’t the fanciest of Swiss Army knifes: it only has a screwdriver, file, knife and scissors. Of course, the MP3 player portion can double as a USB flash drive as well. The built-in lithium polymer battery will give you a good eight hours of juice.