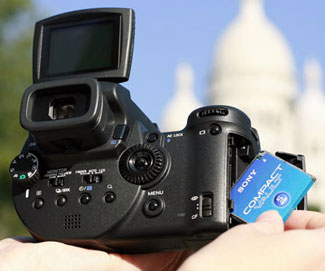 Sony brings to market the 5GB hard disk drive CompactVault. Available beginning November 2005, it is a CompactFlash Type II hard disk drive featuring Sony’s unique Cybercapture technology, making it perfect for photo hobbyists and professionals. The CompactVault, which is the latest addition to Sony’s removable media line, offers users a storage capacity of up to 1600 images (assuming each photo is approximately 3MB) or four hours of MPEG 4 recording.

The CompactVault is a sleek one-inch hard disk drive capable of a native transfer rate of up to 96.7Mbps. If you think that’s fast, consider the fact that this transfer rate can be further enhanced when it is used together with future Sony Cybercapture-enabled products. This means even faster recording of images and higher quality of videos for the end user.

CompactVault is compatible with devices having a CF Type II slot. As such, any photos recorded can be easily moved to your Windows ME, Windows 2000 or Windows XP enabled PC. For laptop owners, transfer images using a PCMCIA adapter.

“The COMPACTVAULT is the next step in the development of our removable media family…It offers high storage capacity for state-of-the-art digital cameras, such as the new Sony Cybershot R1. In addition, we expect to see devices becoming available in the future that take full advantage of our Cybercapture technology. By moving the file system from the hardware device onto the hard disk drive itself, the Cybercapture technology will allow an even higher recording rate of still pictures in multi-shot mode as well as higher quality recording of moving pictures, on a COMPACTVAULT running in AV mode”, according to Sony Europe’s Recording Media & Energy division Product Manager Céline Haffner.