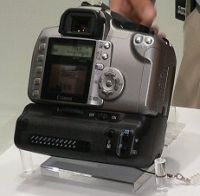 Frustrated by the life of the battery on your digital camera? Canon is working on a solution that could change the way we power our mobile devices. At a technology expo in Japan this past week, Canon unveiled a digital camera running on a fuel cell powered by hydrogen. The cells were integrated into the hand grip portion of a compact camera in the models shown on display.

At this point, the fuel cells only have a volume of energy density that meets that of a lithium ion secondary battery of the same size. Canon is aggressively looking to improve the density, they believe they can achieve three to five times more run time in the near future.

Along with the cell integrated into the camera, Canon displayed three sizes of cells – one for digital cameras, another for small portable devices, and a larger third one for portable printers and the like. The largest cell includes a power generation unit along with the fuel cell.

Canon is not alone in developing this technology. Hitachi has already displayed a fuel-cell powered PDA. At this point, neither company is giving any indication of when this technology might reach market. I wouldn’t hold my breath considering the never ending delays in methanol fuel cell developments, we have been anticipating this technology for years, but only see prototypes.