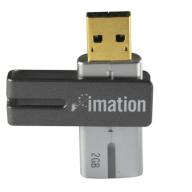 Imation has added a new model to their existing line up of USB 2.0 Swivel Flash Drives. The new Swivel Pro Flash Drive, according to a company statement, weighs less than one-half ounce and is about the size of a AA battery. Bearing the name Swivel Pro Flash suggests a “one step” design allowing for much easier connection to a PC’s USB port.

Some other notable features of the new Swivel Pro Flash Drive include a reading speed of 12MB per second, a blue light glow indicating connectivity and data transfer, and off course a quick release lanyard for carrying the drive around one’s neck.