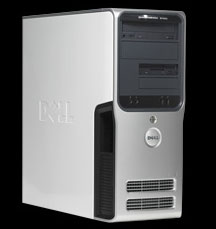 We’ve all experienced the loss of precious data at one time or another, it’s a nightmare no one should live through, but now lost data has become a thing of the past. Dell’s revised Dimension E310 desktop, Dimension E510 and XPS 400 systems, all due out in November, will feature a new automatic backup system. The technology dubbed, Data Safe, is designed to do away with lost data due to viruses, accidental cleaning of the recycle bin, or what ever.

The technology combines Symantec’s Ghost 10 data backup software and two hard disk drives that mirror each other through a level 1 RAID (Redundant Array of Independent Disks) configuration.
Both hard drives are exactly the same says Ketan Pandya, a senior manager with Dell’s Dimension group. The second drive acts as a real time backup. Dell calls the main drive the C drive and the back up the D drive. The back up technology works with two 60 gig drives, two 180gig drives or two 225 gig drives.

You could wipe out the RAID configuration and erase the second drive so as to have another basic computer for less than $600, Pandya says.

Dell’s introduction of a hardrive backup system is nothing new. Both Lenovo, and Hewlett-Packard also use backup software.
Sam Bhavnani, an analyst with PC industry research firm Current Analysis said, “Dell is at the forefront of a trend that could see all computer systems coming with an installed backup system”.