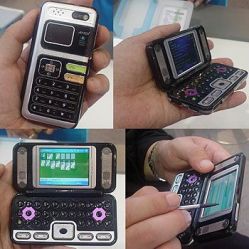 Amoi out of China has announced the E800 WM5 Smartphone, it is loaded with goodies and looks to have every feature covered.

It’s a clamshell model, like the Nokia 9300 Communicator which is finally coming to the U.S. from Europe (were hoping it isn’t quite as big as that one), but with a bit more compact and ruggedness. There’s a 1.1-inch OLED screen on the outside of the phone, but the treasures are revealed when you open it up. You find a full QWERTY keyboard and a 2.4-inch LCD display. It’s powered by Windows Mobile 5, has Bluetooth and, as you would expect, a 2 megapixel camera. And if those are dual analog joysticks in the center of the thumb board, you can expect some sweet mobile gaming action.

What’s this thing of beauty going to cost you? US $699. It will be available in Asia starting on January 6th.