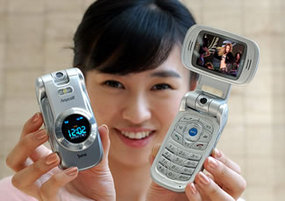 Samsung is releasing a new cell phone called the SCH-V700, but will most likely only be available in Korea. It has a rotating screen that can tilt 90 degrees, and you can connect the phone to your television.

The Samsung SCH-V700 also has 200 megabytes of built-in memory, which users can double up with a 256 megabyte card. It features a 2.0 megapixel camera and comes in pleasant pastel-like blue, pink, white, and silver. The best part about the package is the portable multimedia player (PMP) features. Users can download movies from web sites and watch them on their phones or TVs. Think about it. Who needs a bulky laptop when you can sit back on a plane and watch movies on your little phone? Yes, the tiny screen is…tiny, but if you’re a light traveler, you’ll make the sacrifice.

The Samsung SCH-V700 will cost approximately 600,000 KRW or about US $560 incase you are in Korea and plan to pick one up. The swivel screen is nice, though. It would be great to have that now over here.