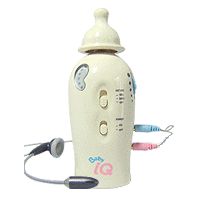 South Korean based Daeyang E&C, who specializes in fetal communication systems has decided to ship its Baby iQ plus Parental Communicators to the North American market soon. This device is considered to be an effective state-of-the-art communicator that facilitates intimate communications and development of the emotional bond between mother and child when the latter is in the womb.

In appearance terms, the Baby iQ plus resembles that of a baby bottle. It offers a host of services to understand the development of the child in the womb. With audio stimulation as the basis of its functional modality, the device offers the would-be-parents the chance to listen to their baby’s movements and how it is responding to different sound stimulations. It also facilitates the playing of the music for the baby and an expectant mother can easily make out what the baby in her womb likes or dislikes. Playing the music of the baby’s choice is considered to be good for the development of the brain of soon-to-be born. It also helps the baby in the fetus to begin recognizing the voices of the parents even before the child opens his/her eyes outside the mother’s womb.