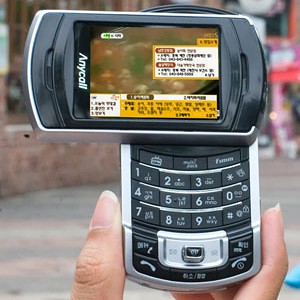 Samsung, one of the major mobile handset manufacturers of the world has announced the launch of its newest CDMA mobile phone, the SPH-B2300. This new offering from Samsung comes equipped with some of the coolest technologies available in a mobile handset.

The CDMA handset slides, rotates, twists, inverts, flip-flops, and does every other descriptive word out there. The phone is so rich in technology that users are forced to ask what it doesn’t do.

Features of the Samsung SPH-B2300 include; satellite DMB broadcasting reception, as well as BIFS (Binary Format for Scene) technology, which allows the user to interact with the TV programming. Also a QVGA display, MP3 playback, video-on-demand, TV-output, EV-DO, IrDA, and Pictbridge for mobile printing.

The SPH-B2300 will be made available in December for KTF subscribers in South Korea and according to speculation, will be available in the US and Europe markets from early next year.