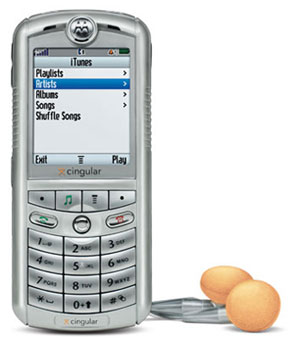 What was expected to be the next-generation MP3 player, the all-in-one mobile device, the mobile phone of mobile phones, may not have had enough of it all to entice consumers. The Motorola ROKR, which features iTunes and a 100 song limit, has been failing according to Cingular Wireless and Motorola’s CEO, Ed Zander.

Cingular is reporting that results are slim after one of the most intense ad campaigns the company has put on. Zander says he is disappointed with the phone’s marketing and plans to fix it, so maybe Cingulars efforts are to blame? The ROKR has only sold 83,000 units a week, compared to the 500,000 a week that sold for the RAZR.

Six times as many customers are returning the ROKR, , according to American Technology Research analyst Albert Lin, who was advised by distributors, retailers and call center workers at Cingular Wireless LLC, which sells the phone.

Some reasons could be the lack of capacity on the ROKR, or the lack of functionality for users to purchase songs directly from the phone. Also the 100 song capacity is very limiting, rivals Samsung and Nokia have the i300 with a 3GB of storage and the Nokia N91 with 4GB storage offering much more storage.