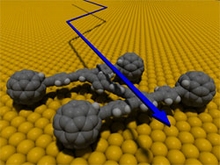 A group of scientists hailing from Rice University hav now claimed to have developed the world’s smallest car, the nanocar. This driving body has now been described in a research paper that says the car contains a chassis, axles and four buckyball wheels. More details about this nanocar is expected to be published soon in an upcoming issue of the Nano Letters journal.

These single-molecule vehicles have a measurement specification of just 4×3 nanometers, this is just a bit wider than a strand of DNA. The car has four buckyball wheels made of 60 atoms apiece and connected to four independently rotating axles and an organic chemical chassis.

The developers of this car look at it as some sort of landmark in molecule scale manufacturing. James M Tour, a lead researcher of the project commented, “The synthesis and testing of nanocars and other molecular machines is providing critical insight in our investigations of bottom-up molecular manufacturing. We’d eventually like to move objects and do work in a controlled fashion on the molecular scale, and these vehicles are great test beds for that. They¹re helping us learn the ground rules.”

The car was evolved after an extensive eight years of. It’s main function in the future will be to carry nano-sized payloads from point A to B.