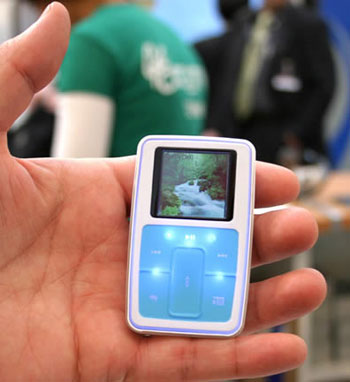 Creative has made its intentions clear with the launch of Zen Micro Photo, they want to give the Apple iPod Nano a run for its money. Though one may argue that Zen Micro Photo does not have the great looks of the nano, Creative seems to be fully convinced that what it lacks in looks, it compensates in features. The Zen Micro Photo offers a host of features including 8 GB of storage and support for MP3, WMA and Secure WMA and a photo-viewing 262K color OLED display and FM radio.

Creative’s new offering is based on the 6 GB Zen Micro to which has been further improvised with the adding of photo viewing capabilities and a 1.5-inch, 262K color OLED display, enabling photo viewing on the mainly audio-oriented device. The audio player has also been upgraded with an 8 GB hard drive compared to the 4 GB of flash memory on Apple’s iPod nano; the list of supported audio formats remains unchanged with MP3, WMA and WMA DRM on board.

Other highlights of the Creative Zen Micro Photo include voice recording capabilities and synchronization of Contacts, Calendar and Tasks information with Microsoft Outlook – all taking place over a USB 2.0 connection.

Creative Zen Micro Photo claims a playback time of up to 15 hours, and is available for $250 USD in the American market and for 300 Euro in the European market.