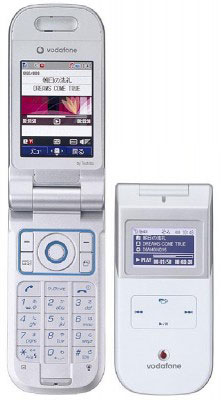 Some music to the ears of mobile users who love to listen to their favorite music while on the go. On Thursday Vodafone K.K., one of Japans’ leading mobile operators announced that it will start selling its newest music handset, the Toshiba 803T.

The Vodafone 803T features easy access to music files and can play music even when the user is surfing the web or emailing. The 803T will hit stores on 22 October in the Kanto-Koshin and Hokkaido region, then nationwide on 26 October.

For easy navigation and storing of your favorite music, the Vodafone 803T features a ‘Music Console’ so that users can download full music tracks from Vodafone live! or transfer music from their PC’s to memory cards while the handset is closed. It also features a large-size 1.3-inch sub-display capable of displaying artist names, song length and other information which enables users to find the music they want to listen to at a glance.

Some of the salient features of the 803T are as follows: