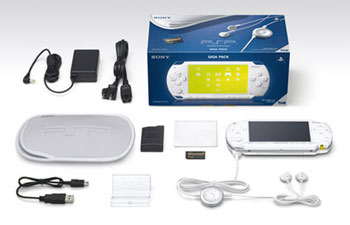 Sony will be selling a bundled version of their PSP mobile gaming unit with a 1GB Memory Stick Pro Duo card. In addition it will come with a small stand, and the usual accessories like USB cable, case, earphones and remote.

A one gig card will run consumers an extra $80 or so dollars, this is a great savings to entice users more, and keep them on the Sony style rather then the popular Nintendo DS or the upcoming Gizmondo.

The price will most likely stay the same, so anyone hoping for a price cut for the holiday season is just out of luck. Sony will just keep adding to the bundle and keep the price the same, around US $250. Expect the Sony PSP 1GB Bundle to be available in Japan, Asia, Europe, and North America beginning this November.