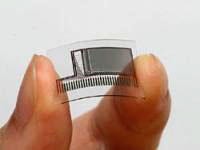 A major technology breakthrough in flexible memory by Seiko Epson this week shows the release of a prototype flexible 16kb SRAM memory module.