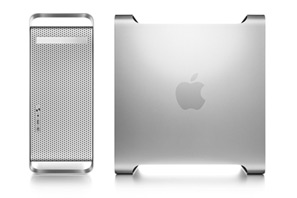 There is something very appealing about the Mac. Despite the PC’s world dominance, Apple represents the little engine that could, a rebellious alternative for users seeking a virus-free operating system and a certain level of cool consumer consumption. Apple’s products are a bit pricey for me; perhaps that is part of the appeal.

Apple just released a powerful upgrade to their G5 desktop system, the G5 Quad. Users can choose either a Power Mac G5 Dual or Power Mac G5 Quad. Reviewers warn potential buyers not to expect the Quad to be four times as fast, although the multi-core feature will no doubt speed things up. And the asking price is not for the faint of heart, US $3299.