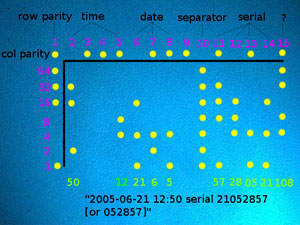 These tracking codes are in the form of miniscule yellow dots that are not visible to the naked eye. Apparently there are no laws governing the printer manufacturer to equip printers with the tracking codes — which encode the printer’s serial number and time and date information. The practice is being followed by printer manufacturers as a voluntary service to Secret Service to fight the rising crime of counterfeiting.

For example, in a printout from a Xerox DocuColor printer, the tracking dots are printed in a rectangular grid of 15 by 8 on every page. These tracking dots can be seen with the help of a Blue light and a magnifying glass. EEF has made available a decoding program of the Xerox code program.

Certainly this may help the Secret service and police to fight counterfeiting but the big challenge posed by this issue is that in the long run, this may eat into Americans’ right to remain anonymous by making it more difficult to print out political or religious pamphlets anonymously.

Speaking on this issue Lee Tien, EFF Senior Staff Attorney said “It shows how the government and private industry make backroom deals to weaken our privacy by compromising everyday equipment like printers. The logical next question is: what other deals have been or are being made to ensure that our technology rats on us?”