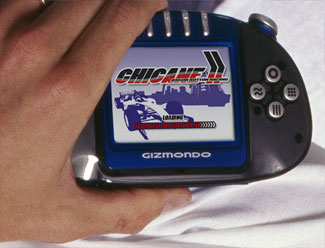 Tiger Telematics, a new player in the handheld entertainment device segment has announced an addition of 14 new game titles to its Gizmondo mobile gaming console device. Tiger will enter the PSP and DS dominated market this weekend with the debut of their versatile console, the Gizmondo. The launch is set for the 22nd October 2005, seven titles will be released simultaneously with the gaming unit, followed by seven more in the following weeks.

Games like Chicane, Hit & Myth, Conflict: Vietnam and Carmageddon will be joining the rapidly expanding catalogue of software for the Gizmondo. Making the formal announcement about the addition of new games on Gizmondo devices, senior officials of the company confirmed that Tiger Telematics is all set to break new grounds in the handheld entertainment segment. Mike Carrender, CEO, Tiger Telematics commented, “There is a great deal more in store. We will soon be launching the first ever handheld games using GPS, Augmented Reality, and Gyroscopic Camera Technology. This is truly impressive software, and it’s totally unique to Gizmondo.”

Meanwhile, the new games offered for the system will cost anywhere between US $19.99 and $39.99 and will be provided on the SD card format, it seems much nicer to me than a proprietary solution like UMD.