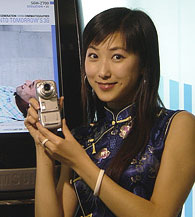 Samsung is all set to make a very aggressive move to further consolidate its position in the world’s fastest growing cellular market, China. For this, the company has chalked out the strategy of releasing some of its most popular handsets in the Chinese market.

To begin, Samsung has unveiled two of its latest models, the SCH-M709 and SCH-E-239, which are immensely popular in Korea but have not been released in any other market of the world. So they will be making their international debut in China. The SCH-M709 is a 7 megapixel camera phone whereas the SCH-E-239 is a slimmer 15.9mm thick handset and is projected to give Motorola’s RAZR a run for its money. The 7 megapixel camera phone marks an advancement over the SCH-M509 models which offer 5 megapixel and are already available to the Chinese consumers.

Samsung feels that it is making right moves to win more favors with Chinese consumers. Lee Ki-tae, President of Samsung Electronics’ Telecommunications Network comments, “Our premium handsets with advanced technology and design will take the lead in the Chinese mobile phone market”.