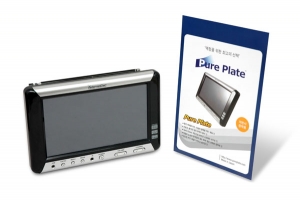 Existing PDA and LCD protection films out on the market have a tendency to bubble up when attached. Because of this, the LCD protection film for navigation systems were not primarily marketed. This new LCD protection film, Pure Plate, has been manufactured with a special agglutinant, which makes it attach to a notebook or PC without any bubbles.

Also because this Pure Plate is made of optical PET material, it has a special hard clear coating which is suitable to be used for large size navigation displays to get great effect of high quality screen with low reflection and increased contrast.