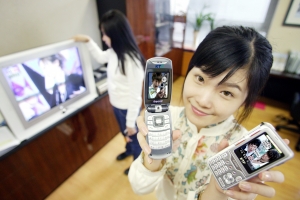 Have you ever thought of making your own version of a comedy parody when you watch your favorite TV drama or Movie?

KTF has announced video mobile contents ‘Dramatoon’, allowing KTF customers to download and make parodies of original movies or dramas with their own imagination.

The basic concept of this Dramatoon is that the consumer can stop a favorite scene from an original TV drama or movie and apply any other scenes like animation pictures and sound to the stopped scene. And then gather all the media to remake the stopped scene and change it to a ‘moving slide’ video file.

KTF already has made parody comedies using famous Korean movies and TV drama, the parody comedy is ready to be downloaded and it cost about 50cents for one episode.