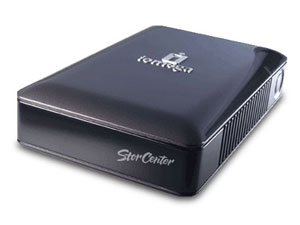 Iomega Corporation has now claimed to have developed the fastest hardware solution for storage and sharing of digital content on a home or small business network. The company is projecting its new offering, the Iomega StorCenter Network Hard Drive, as a complete solution with features like a built-in Universal Plug and Play, A/V network media server and FolderShare software. An additional calling card of the new drive is its capacity. While its initial models that will become available by the end of this month, will be offering a capacity of 250 gigabytes, by early next year the company will be offering upgraded versions to the consumers in the capacity range of one terabyte.

The company is exuding confidence about the success of its new offering on the grounds that it will provide a level of convenience to the end-users which they have never experienced before. Lee Williams, Vice-President, Iomega Corporation commented, “The Iomega StorCenter Network Hard Drive makes storing, experiencing and sharing most forms of digital content simpler and easier than ever, creating a true media hub for today’s digital home and small business, and without always requiring the use of a PC.”

The easy-to-install StorCenter Network Hard Drive has been designed to support Windows, Mac OS X, and Linux operating systems at a very high transfer rate. To average home users, its built-in network media server will facilitate streaming of their favorite movies and music which could be directly linked to a home audio system or television through a digital media adapter, and no PC will be required.