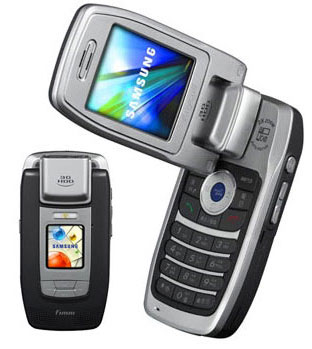 Life for mobile users particularly in South Korea will never be the same. Samsung has launched their second hard disk drive equipped mobile phone, the SPH-V7900 for the Korean market. The CDMA EV-DO 3G capable V7900 has a built-in 3GB hard disk that facilitates storage functionalities of the handset like that of photos, movies, or music files.

The V7900 boasts of a 2 megapixel camera. The camera has a 2x optical zoom capability and offers easy recording of both MPEG4 video and still photographs. For viewing of photos and videos, you have a 262k color QVGA (240×320) LCD. Another significant feature of the handset is USB 2.0 and IrDA connectivity. It is also very useful for those who would like to see the stored images on a large screen, it is possible to output images to a TV or any other large screen.

The SPH-V7900 is also very light weight – only 165g and has a thin dimension of 103mm x 52mm x 28mm. The device has presently been launched in Korea and consumers can buy it for a price equivalent to about US$700 or 580EUR. No word is out on an international debut.