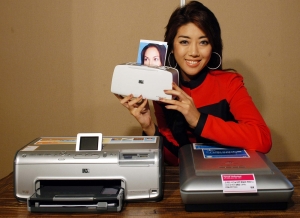 Korea HP has announced their upcoming Fall HP Festival this November, they plan to announce man new products, digital cameras, scanners and some of the fastest Multifunction photo printers ever released by HP.

The HP PSC 3310/3110 Photo printer and HP SJ4890 scan-jet will be on display at the festival. The PSC 3310/3110 is able to print 4×6 size pictures in only 14 seconds. And the scan-jet is capable of simultaneously scanning 30 different types of negative films at the same time. The festival also shows the HP PSC 2575, an ink-jet multifunction photo printer, equipped with network function.