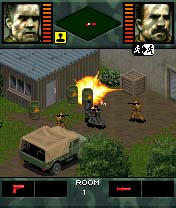 The game is shown from an isometric perspective, this means the player can see the action exactly as it happens, with no delay or lag, which lets them plan tactics and strategy accordingly.

It will be available on many Java-enabled handsets in October through mobile network operators, portals and retail channels.