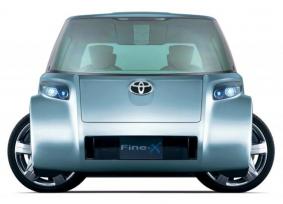 Japanese automobile giant Toyota, which had pioneered the concept of fuel cell hybrid vehicles way back in 2001, is all set to unveil a new car model of this series in the Tokyo Motor Show scheduled to commence on the 22nd of October at the International Convention Complex (Makuhari Messe) in Makuhari, Chiba.

The car has been named Fine-X, and it will feature such enhances as on-the-spot rotation, four-wheel independent drive, four-wheel independent steering and electric in-wheel motors housed in each of the four wheels. As an active participant in the show, Toyota has chosen the theme of “Ecology & Emotion” for this year and Fine-X perfectly fits in the bill of this concept.

The car will have the dimension of 3,860 mm in length, 1,750 mm in width and will have a height of 1,550 mm. This four seater will have a special carbon neutral system and will be laden with the latest IT/ITS peripheral-monitoring technology for easy driving experience. The company is also claiming that the Fine-X will be providing more interior space than the previous environmental friendly cars that have churned out of its assembly line. On an overall basis, Fine-X certainly will be a delight for those motorists who are equally concerned about having a less polluted environment around them.