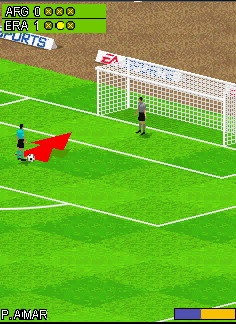 If you are hooked to Vodafone services, remain glued to mobile games and also happen to reside in any of the these locations namely – Europe, South Africa, Egypt, Australia and New Zealand – then here is the news to make you smile a bit more. Electronic Arts and Vodafone have struck a mobile gaming agreement wherein EA’s games will now be added to Vodafone live and can be purchased by users in the above-mentioned locations.

The mobile games which will be made available to Vodafone live customers in the initial phase will be EA’s popular title EA Sports FIFA 06 Mobile. Gradually, the customers will also be given the option to download other games like The Sims 2 and Need for Speed Most Wanted. Electronic Arts, in fact, has planned to launch between 15-20 mobile games in Europe by the end of 2006 and eventually all these games are likely to be available to Vodafone live customers.

The gaming unlimited facility, as the new agreement underlines, will be available to customers in as many as over two dozen countries and the prominent among them are — Australia, Austria, Belgium, Egypt, France, Germany, Greece, Ireland, Italy, Luxembourg, New Zealand, South Africa, Sweden, Switzerland, Spain and the UK.