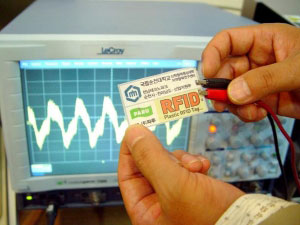 Sun-chan university in Korea has developed an organic chip which will cut down the price of RFIDs (Radio Frequency Identification).

Before this new process it was very complicated to manufacture RFIDs, and this resulted in high prices. The new RFID Tag chip is able to function on the 30 kHz frequency by only using 100% organic compounds and an inkjet printer. By cutting down the price considerably it will allow for thee mass production through the printing process. The chip can also be printed on any paper, plastic and wood standard.

The existing RFID chip price is around 0.5-1 dollar. In 2000, Wall mart predicted using RFID on a full scale if the RFID tag price would go down to 5 cents. In 2003 Japan released an RFID tag that would cost 7 cents to manufacture. This newly developed chip from Sun-chan University will cost 0.5 cents to produce, much lower than what Wall mart predicted.

The success of this chip will bring a turning point in the physical distribution industry. And eventually, it will create many more jobs for this sector.