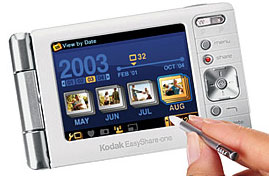 Kodak has announced the first computerless Wi-Fi digital camera. The EasyShare-One has the capabilities to connect to a wireless network and e-mail photos directly to friends and family without a computer.

The camera sports a unique PDA-like design and interface, it has a large 3-inch touch screen LCD, a 4-megapixel sensor, 3x optical zoom and storage for about 1,500 photos (256MB internal).

Nikon Corp. also has a Wi-Fi camera on the blocks, the Nikon P1. However this remains in a different class then the Kodak EasyShare One, the P1 still requires a computer to send and transfer images; Kodak’s works independantly.