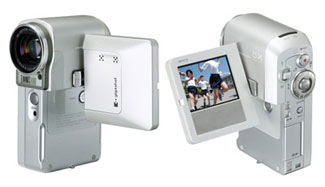 Toshiba has just announced its new small camcorder, the Gigashot V10. Priced at 59,800 Japanese Yen (aprox. US $530), it should be available on store Japanese shelves by the end of October.

From the moment the LCD monitor is opened, the scene that you would like to shoot begins buffering and within a short span of less than 5 seconds is rolling tape. Can anything beat it?

Even though its design is very plain, the Gigashot V10 has some interesting specs, however, it does not record in MPEG4. MPEG2 was chosen, this provides better quality, but the compression is just not high enough. As far as sound is concerned, Dolby digital 2ch with a bit rate of 192 kbps is available.

Five different modes of video recording are possible; HQ, HQ (WIDE), SP, SP (WIDE) and LP. The speed or bit rate set for the HQ and HQ (WIDE) is approximately 6mbps while for the SP and SP (WIDE) it is approximately 4mbps. The LP can be executed only at 2mbps.

By using the USB 2.0 (High-Speed), you can connect to a PC. In the LAN environment, it is possible to transfer a photographed image with the gigashot to the RD, not vice versa. 4GB of data/image can be transferred approximately in 80 minutes using the RD-XS53. The USB 2.0 transfer with a PC can take 15-30 minutes.