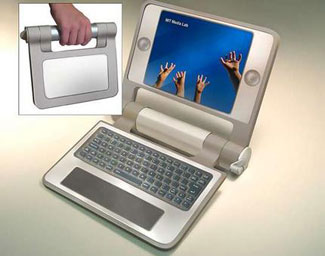 Soon a $100 laptop meant for the World’s children will be available. This unique product is not coming from the assembly lines of mighty global computer manufacturers like Dell or HP-Compaq. It’s being developed by MIT Media Labs under the supervision of its director Nicholas Negroponte who calls it “the most important work of his life.” The first prototype of the $100 laptop will be put up for display at the World Summit on the Information Society (WSIS) in Tunis on November 17.

According to some initial buzz on the prototype, the laptop for children has been designed in a way that it appears out to be a thinned down version of the Linux operating system. The laptop possesses some unique qualities like the system is made of rubber. The system also boasts of a retractable crank that can be used to generate 10 minutes of power for every one minute of cranking. Its display is also capable of running in two modes: as a typical color TFT panel for regular “computing” as well as a black and white mode.

According to Negroponte, the project is fast nearing completion thanks to sponsored support from companies like AMD, Red Hat, and Google. MIT Media Labs already seems to have identified the potential hot spots for the sale of its new product and looking at the markets of China, Brazil, Thailand, Egypt, and South Africa as prime destinations in the initial phase. For MIT Media Labs and Negroponte, the success of this project would mean turning the tables on the conventional wisdom that a $100 laptop is not possible. But if it succeeds, it would mean unlimited advantages for its little users.