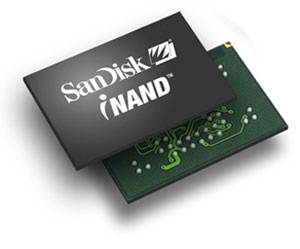 SanDisk today introduced yet another revolutionary memory solution, the SanDisk iNAND. This is the smallest, safest, and easiest integrated high-speed NAND flash storage device that has ever been designed. Its purpose is to replace the slow, bulky and sometimes unreliable micro hard drives. Embedded flash memory will revolution products in the future, it is now the most popular storage solution for consumer electronics products such as MP3 players, GPS devices, personal media players and mobile phones.

This announcement was made at the CTIA Wireless I.T. and Entertainment 2005 trade show in San Francisco, where SanDisk is exhibiting products in booth #944.

“Embedded flash has quickly become a strong alternative to micro hard drives in consumer electronics products due to its decreasing cost-per-megabyte (MB) and increasing capacity points,” said Jeff Ellerbruch, director of consumer OEM marketing at SanDisk. “In addition, solid-state flash memory has many other advantages over rotating mechanical hard drives that include high performance, much lower power consumption, increased durability (no track skipping) and significantly smaller size and weight. SanDisk iNAND also offers increased design flexibility since it is designed to work seamlessly in conjunction with a removable card slot. iNAND also incorporates for the first time SanDisk’s new TrustedFlash technology, assuring the same level of content security for embedded stored data that is available on TrustedFlash cards.”

SanDisk iNAND is expected to be available in capacities ranging from 256MB to 4GB. Product samples are available now with production scheduled for the fourth quarter of 2005. Pricing for 2GB iNAND devices is $95 in 10,000-lot quantities and will be available in October. The 4GB is expected in March 2006.