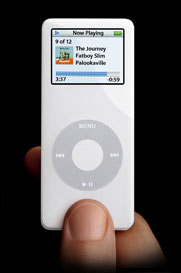 Apple’s iPod Nano may have endeared itself instantly to the music lovers all across the globe, but now many users are openly venting their grudge against the company’s assurance that it could be safely placed in your pocket.

iPod Nano owners are claiming that the color screen of the device has been damaged after they carried it in their pockets. The number of upset customers is growing, one user has even gone to the extent of setting up a website flawedmusicplayer.com to register grievances. And cribbing opinions are flowing in to the website in quite a sizeable number. One customer writes, “After running with the Nano twice and being very careful to keep it safe, the Nano shut off. I reset it but nothing happened, the screen just showed an off-white.” “I broke my iPod while it was sitting in my pocket. Apple told me I’d be better off buying a new one, instead of sending it in, ” says another dissatisfied customer. A good number of responses to the site clearly underlines that Apple should recall the Nano.

Apple, however, doesn’t seem to have become too concerned with this problem till now as it maintains that “stores will examine requests for the return of damaged players.” But in the run-up to the Christmas season, may mean its rival companies capitalizing on this weak spot of Apple’s iPod Nano, in addition to price-cut strategy, the company may not have any other option but to look at this problem as a major one rather than a pocket sized one.