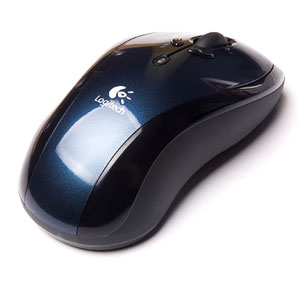 Logitech, makers of awesome computer peripherals, recently introduced a whole bunch of new mice packed full of features. I have been a Logitech fan from way back after I switched from my Microsoft Explorer mouse to the Logitech MX500. Since then I grabbed the MX1000 laser mouse and haven’t had any regrets! Now, being a Logitech fan boy I will try to keep this review as unbiased as possible.

Now on to the matter at hand. Included in the release of new mice was the Logitech LX7 Cordless Optical Mouse

The LX7 comes packaged just like any other Logitech mouse in a cardboard box with plastic over the area with the mouse. When I opened the package I was confronted with the Mouse, a USB wireless dongle, a USB extension dock, and a USB to PS2 adapter. The wireless adapter looks like any old USB keychain and is needed to receive the mouse signal.

The design is definitely slick. It looks as if the LX7’s target audience would be business users that want a portable mouse with a slick stylish looking design. The buttons are all flush with the sides, the wheel and forward/back buttons blend right in perfectly. The side has some sort of suede rubber that acts as a nice grip for your fingers.

As I stated above, I currently use the MX1000 for my own personal mouse. When the LX7 is in my hands it is a lot smaller than the MX1000 and doesn’t fit into my hand as well. But this is my own preference, I do lots of gaming and need the mouse to fill my hand to give me the best accuracy I can obtain.

As for the rest of the design, the mouse is pretty solid, but not as solid as the MX1000 or even the MX500. The little battery compartment seems a bit lose when it is fully latched so whenever you pick it up and put it back down you hear a little hollow knocking sound. Other than that the mouse feels fine.

Also, for you lefties, this mouse is for you! You can use it in your left or right hand as it is symmetrical. 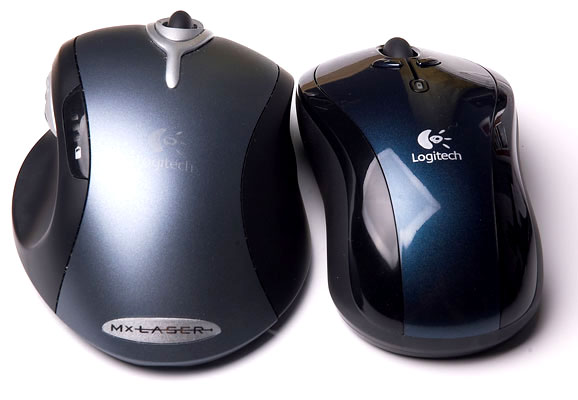 The LX7 has some really LONG battery life up its sleeve. It takes two AA batteries and Logitech claims that you won’t need to change them for 8 months! It accomplishes this by a few different methods. Most optical mice have a LED light that seems like it’s on 24/7. The LX7 also has a LED but it is very dim and only activates when there is movement, when there is no movement it shuts the mouse off. Logitech calls this the ‘invisible optical’. In addition to that, you can also manually shut the mouse down via the on/off switch on the bottom.

As for the buttons, it has two regular buttons for left and right clicks. In addition it has a forward and back button to control your browser and a wheel that scrolls web pages up/down/left/right and also zooms on click – pretty sweet function which is also found in most Logitech mice these days. Also on the top of the mouse is a battery indicator that will only light if the batteries need schanging soon.

The optical sensor for the LX7 is rated at 1200dpi which is pretty good, and like I said, this isn’t a gaming mouse. If you want a gaming mouse go for something like the G5 which has 2000dpi sensitivity. I didn’t notice any problems with sensitivity booting around my desktop or drawing in Photoshop so no problems in that department.

The mouse uses Logitech’s 27 MHz wireless mini USB receiver to communicate with your PC. Both the receiver and the mouse are paired at the factory so they work right out of the box.

The mouse performs great; all around no complaints unless you really need more accuracy for gaming. You can easily tell that this mouse is aimed at people who want a stylish portable mouse rather than one that they can beat their friends senseless online with.

The tilt wheel is solid and doesn’t make any odd clunking sounds when turning it. I even prefer the LX7 wheel over my MX1000’s wheel due to its solid feel. Same goes for the left and right click, they too sound very solid and quiet. I would have preferred that the forward and back buttons be in a different place, maybe even to the side of the wheel, but I am sure that is user preference as well.

As for the battery life, well, I will get back to you next year! With a life of 8 months I haven’t had a chance to determine the life yet.

Bang for your buck