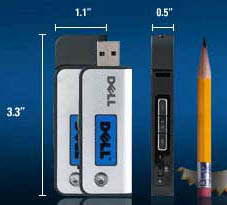 Dell has stepped up to the plate with its iPod Shuffle competition with their new DJ Ditty. From my first impression, it definitely isn’t as sexy as the iPod Shuffle.

The player will come with 512 megabytes of memory and will hold around 220 (64kbps WMA) songs. It will weigh in at around 1.29 ounces, which is almost twice as heavy as the iPod. The extra weight most likely comes into play when you consider the built in LCD, FM tuner and hopefully aluminum casing. The LCD will enable you to manage playlists and browse tracks and menu options. The battery life will last 2 hours longer than the shuffle at 13 hours.

I am not really an Apple fan boy, but I’d have to say that Apple will most likely still hold the market share with their Shuffle. The Dell DJ Ditty isn’t as stylish looking and doesn’t have the sought after Apple brand name.

The Dell DJ Ditty is selling for $99 on Dell’s website. Also, in other news, man tries to light his cigarette with his new DJ Ditty due to its exact resemblance to a lighter! 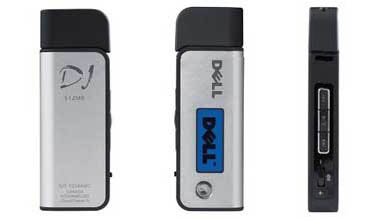