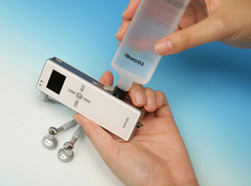 They are designed to test the operations of mobile audio players in conjunction with fuel cell technology. The two fuel cell units have an output power of 100mQ and 300mW, which are used in a flash-memory based and a hard drive based MP3 player respectively.

Both prototype players include components related to the testing and are W35mm x L110mm x D20mm (flash memory) and W65mm x L125mm x D27mm (HDD) with the fuel cell units. These sizes can be reduced substantially by removing the extra components and applying optimal design for commercial products.

Toshiba’s DMFC features a passive fuel supply system that is suited to smaller fuel cells and use with a highly concentrated methanol solution. Fuel cells usually mix methane with water in a concentration of less than 30%, a dilution that supports generating efficiency but which requires a fuel tank that is much too big for portable equipment. Through durability and reliability tests with the new units, Toshiba will accelerate technology enhancements, including development of production technology, to support integration of DMFC into commercial products expected to appear in and after 2007.

The two prototype players and their methanol cartridges will be exhibited at the CEATEC JAPAN 2005 which will be held at Makuhari Messe, Chiba Prefecture, from October 4 to 8, 2005.