Magellan has announced an upgrade to their RodeMate series. The new RoadMate 360, a 14-channel GPS receiver based on the Hertz NeverLost system. The 360 looks almost identical to the 300 version except for the larger LCD screen.

The device comes with pre-loaded maps for Canada, Puerto Rico and the entire US. Turn-by-turn voice prompts, touch screen, and 3D graphics will help you navigate from point A to B with minimal frustration – unless it tells you to go on a road with horrible traffic, which I have experienced before when I have navigated with an in car GPS.

The 360 also has an optimized QuickSpell keyboard with a new Autofill feature that guesses your street, this makes it easy so you don’t have to tap the whole thing out. One down side is that you can’t expand your mapping capabilities due to there being no expansion slot. So all those new suberban streets may not show up in a year or two. 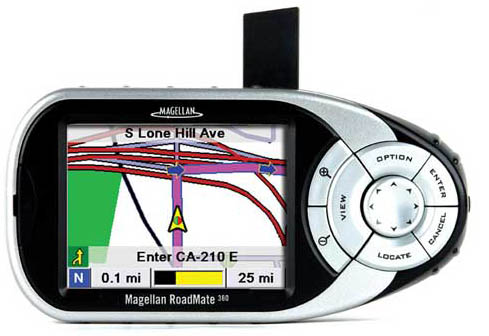