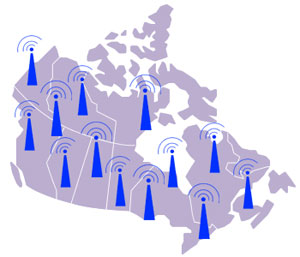 A massive cooperation between Canada’s two major wireless carriers will result in one of the most extensive wireless broadband networks in the world.

A pool of broadband spectrum holdings owned by Rogers Communications and Bell Canada will be used for the network, Inukshuk Internet Inc., are the ones in charge of the plan. Bell and Rogers are expected to chip in $200 million of their own money to build and operate the new network. Once completed, it is expected to reach over 60% of Canadians by the year 2008.

“The promise of wireless broadband is here and Bell and Rogers have the expertise, resources and commitment to make it happen,” said Bob Berner, Chief Technology Officer of Rogers Communications. “This is a powerful tool for Canadian businesses and consumers – both of whom will benefit from the substantially increased and accelerated competition the network will bring.”

The wireless towers and network infrastructure of Bell and Rogers will be managed by Inukshuk. Once integrated, the companies will offer customers a combined service of voice, data, and video streaming in their homes, on the road, and in their pockets.

Inukshuk’s plans are to cover over 40 cities and 50 rural remote communities throughout Canada, ideas are also on the table for an international roaming agreement with U.S. carrier Clearwire Corporation, thus giving Canadians access when over the border.