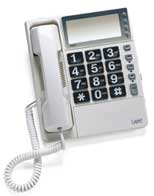 Sprint Nextel have now introduced a new telephone device that claims to make communication easier for the hearing impaired. Billed as CapTel Relay Service, the telephone provides precise captions on the screen of the phone which ensure smooth conversation even if one party on the line has hearing problems.

Mike Ligas, Director, Sprint Relay on the utility of the product says, “Using CapTel can be a life-changing experience for many individuals, as it allows them to communicate more naturally with family and friends.” The technology for this phone has been developed by Ultratec. Though it resembles any other traditional phone, its specialty lies in a built-in screen where captions could be read live. So the person with a hearing problem on the line could easily make out what the other side is conveying and the thus there will be no interruption in the conversation. Sprint Nextel is promising that CapTel services will be available on a 24×365 basis.

CapTel services have been presently launched in 25 states in the US and will soon be made available nationwide. With nearly 24 million people with hearing problems, Sprint Nextel are looking at a sizable potential market.