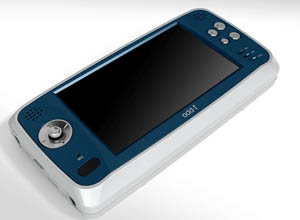 New to the portable media player world straight from Korea is the odd-i, and no, I don’t know where it got its name from. The odd-i P10 has a nice big 4-inch LCD screen (480×272) and is capable of supporting a whole wack of codecs. Not only that but it also has a built in 2MP digital camera.

We have no idea if the odd-i will ever make it to North America, but the market is already flooded with PMPs so I don’t think anyone will be disappointed if it doesn’t.